Use the form above to find your loved one. You can search using the name of your loved one, or any family name for current or past services entrusted to our firm.

Memorial Candle Tribute From
Lougheed Funeral Home
"We are honored to provide this Book of Memories to the family."
View full message >>>
In Memory of
Melvin
Trainor
1941 - 2017
Menu
Send Flowers 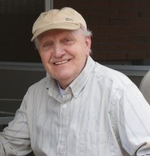 The family announces with great sorrow the passing of Mel in Sudbury on Tuesday, December 5th, 2017 at the age of 76. Loving husband for 54 years to Joyce (Bunting) and their children Kelly Fitzgerald (Kevin), Debbie Sedore (Len), Jody Turcotte (Jamie) and Ashley (Joey Brouillette). Son of the late Melvin and Hazel Trainor and lovingly remembered by his brothers Wayne (Brenda) and Orval and his late sister Edna. Mel’s 10 grandkids were the light of his life, Kourtney Laino (Mike), Jordyn (Scott Denniston), Karleigh, Riley (Melanie), Paityn, Presley, Marley, Sidney, Kieran and Liam.

Born in Sault Ste. Marie to Irish immigrants, Mel grew up in Sault Ste. Marie and St. Joseph’s Island, marrying the love of his life, Joyce, in 1963 where the two of them began their life together. Raising 3 girls in Sault Ste. Marie, Mel worked as an auto mechanic for many years running Mel’s Shell, before he was offered a job to move his family across Canada to British Columbia. Family was always Mel’s priority, with weekend adventures, camping and road trips with all the kids. An adventurer at heart, Mel later moved his family to Garson in 1975, with Ashley being born a few years later. Mel was a northern man at heart, working as a camp foreman for the MNR, he also spent many summers on Manitoulin Island and in Sundridge where he enjoyed boat rides, fishing, BBQ’s and family. Mel’s life was filled with love, and those around him cherished him and looked up to him as a special dad, father-in-law and grandpa. We will miss his smile, until we meet again, your Irish eyes will smile down upon us all and we will cherish you forever in our hearts.

At Mel’s request, there will be no visitation or service. He will be laid to rest at St. John’s Cemetery in Garson. If desired, donations to the Alzheimer’s Society or the Heart & Stroke Foundation would be appreciated.